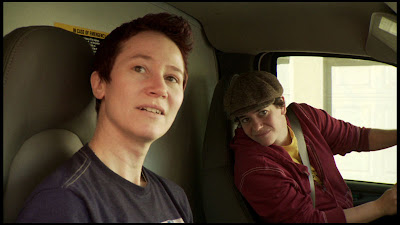 There are a few films screening at the 21st Melbourne Queer Film Festival that I've already seen and previously reviewed; one of which I highly recommend (if you like your comedy pitch black) and another I was deeply underwhelmed by.

Glenn Ficarra and John Requa's I Love You Phillip Morris is hilariously funny and totally unpredictable, and a film I very much enjoyed when it screened at MIFF last year. I'm very much looking forward to seeing it again on the big screen. Conversely, the Danish drama nicknamed 'Brokeback Nazi', Brotherhood, failed to engage me due to its underdeveloped screenplay and an over-reliance on dramatic plot contrivances.

Conversely, Katrina Del Mar's Hell on Wheels: Girl Gangs Forever promised so much but failed to deliver. What could have been an inventive comedy set in a world of skateboarding girl gangs and roller derby was a badly scripted, limply directed, overlong mess. I could see what it was aiming for, but it fell well short.

Thankfully, the films in Short and Girly were of a higher standard, though there will still a couple that only barely limped across the finish line. The best of the bunch by a country mile was Gina Hirsch's concise, warm and witty You Move Me, a comedic celebration of friendship and an evocative demonstration of the film-making adage that less is more. With a sharp script, well developed characters and strong performances, this rare gem of a lesbian buddy movie stood head and shoulders above all the other films in the package.

Written and directed by Rikki Beadle-Blair (who also stars in the film as the out and outgoing dance & drama teacher Loris), the UK teen drama Fit was a real charmer despite being occasionally hindered by its overly earnest and self-consciously educational script.

Adapted from a play designed to address anti-homophobic bullying which has successfully toured UK schools and institutions, the film explores the lives of a disparate group of teens, some of them struggling with their sexuality, other struggling with their peers' preconceptions about their sexuality. There's the closeted gay jock, the straight tomboy who everyone mistakenly assumes is a lesbian, the homophobic bully who is himself bullied by his father, and a range of others who have been brought together in a hip hop dance class at their school for kids who are struggling in the education system.

Is it a trifle over-earnest? Yes. Does it wear its heart on its sleeve? Yes. But the performances are excellent, its message is important, and its vibrant approach to equality and tolerance makes for an engaging, ebullient and delightful film which I thoroughly enjoyed.

Posted by richardwatts at 2:21 pm

Hi Richard - been trying to find a way to get in touch with you. How do I email you? Would love to see if you'd be interested in writing a short piece for us (Australian TV Network). Just on a favourite film of yours. Hope we can touch base soon - Jenna

Hi Jenna - best email for me is burntime (at) netspace.net.au - I look forward to hearing from you!